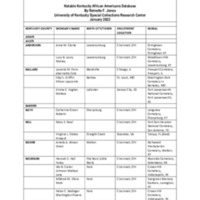 The document attached to this entry lists the Kentucky counties in alphabetical order with the names of African American women veterans from those counties who were enlisted in the Women's Army Auxiliary Corps (WAAC) and the Women's Army Corps (WAC) during World War II. Included in the index are all of the names from older partial lists found in these locations:  African American WACS Born in Kentucky and Kentucky WACs of the 6888th Central Postal Directory Battalion.

WHO WERE THEY?:
These were women born in Kentucky or living in Kentucky when they enlisted during World War II.

WHERE DID THEY LIVE?:
These women lived in various geographic locations in Kentucky and in other states.

WHERE ARE THEY BURIED?:
Among the women veterans listed in the attached index are those buried in various locations in the United States. Whenever possible, the burial location has been added.

HOW WERE THEIR NAMES GATHERED?:
Their names come from the World War II records in the National Archives, Access to Archival Databases [NARA], military records available in the subscription database Ancestry, and articles and obituaries in Newspapers.com and the Kentucky Digital Newspaper Program [KDNP]. Some of the names and additional information were submitted by family members. Names have also been gathered from library resources: books, journals, and reports. If you would like to submit a name and/or additional information, please send a message to rjones@uky.edu.

IS THERE MORE INFORMATION?:
1. All NKAA entries with the subject heading Women's Army Corps (WACs).
2. All NKAA entries with the subject heading WACs 6888th Postal Battalion.
3. All entries within the NKAA Database section African American Women Veterans in and from Kentucky.
4. Giulia Heward, "The Hidden history of the first Black women to serve in the U.S. Navy," 12/15/2020, at AtlasObscura.com (online).
5. “Creation of the Women’s Army Corps,” a Women in the Army website:  https://www.army.mil/women/history/wac.html.
6. “The Unwritten Record: African American women in the Military during WWII,” a National Archives website: https://unwritten-record.blogs.archives.gov/2017/02/01/african-american-filmmaker-william-greaves-on-booker-t-washington-frederick-douglass/.
7. The National Archives, Access to Archival Databases. Negro women enlistees from Kentucky, WWII: https://aad.archives.gov/aad/display-partial-records.jsp....
8. Bitter Fruit: African American women in World War II, by Maureen Honey, University of Missouri Press, 1999.
9. Standing Up Against Hate: how Black women in the Army helped change the course of WWII, by Mary Cronk, Abrams Books for Young Readers, 2019.
10. To Serve My Country, to Serve My Race, by Brenda L. Moore, NYU Press, 1997.
11. When the Sisters Came Marching Home (film), by Tony Brown Productions, New York, 1983. [27 min., 31 sec.].