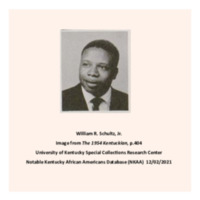 (born: May 10, 1929  -  died: September 2, 1983) In 1954 William R. Schultz, Jr. was the first African American to graduate from the University of Kentucky (UK) with a pharmacy degree. In newspaper accounts of his achievements, he is also said to be the first African American to earn a pharmacy degree in Kentucky. He was also the first to become a member of Rho Chi Alpha Xi, a pharmaceutical honor society, as well as a member of Kappa Psi Upsilon Chapter, a pharmaceutical fraternity, both at the University of Kentucky. William R. Schultz, Jr. was the 1954 Senior Class Vice President.

After his graduation from the Pharmacy College, Schultz taught pharmacy at Florida A&M University for one year. He next entered civil service employment with the U.S. Army as a pharmacist in charge of the dispensing department at Ireland General Hospital in Fort Knox, KY [hospital history]. He remained in that job from 1956-1961; he was listed as an employee of the U.S. Army in the 1956 Louisiville city directory. In 1960, he was named "The Outstanding Kentuckian" by the Louisville Defender newspaper.

In 1961, Schultz moved to Battle Creek, MI to complete a Ph.D. in Pharmacy at the University of Michigan. While there, he served as the vice president of the Battle Creek NAACP Branch until he resigned in 1964 to dedicate more time to his studies. Schultz took a six months leave from his job in 1965 and received his doctorate in May  1965. He was married and had three children. After earning his doctorate, Schultz returned to his employment as the assistant chief of the Veterans Administration Hospital's Pharmacy Services. In 1966, Schultz transferred to the job position of Somerville, NJ, VA Supply Depot pharmacy service.

William Robert Schultz, Jr. was born in Louisville,  the son of Roberta S. Stone and William Robert Schultz, Sr. His parents divorced in 1932, and William and his sister were living with their father and two aunts, according to the 1940 U.S. Census. His father was a mail carrier in Louisville. William Jr. had been living in Wyoming, MI prior to his death in Grand Rapids, MI in 1983. He is buried in the Grandville Cemetery.