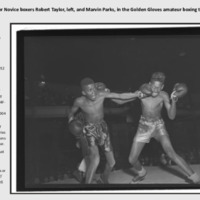 Black Boxers and Golden Gloves, from Segregation to National Champions

When the Golden Gloves amateur boxing tournaments developed in Kentucky in the 1930s, they were segregated. Within local tournaments, there were the weight divisions for the white boxers and the weight divisions for the colored boxers. "Colored" was the term used for African Americans. Some of the tournaments were billed as regional events. One of the first tournaments took place in Mayfield in 1932. Boxers from Bowling Green, KY, competed in the tournaments in Nashville, TN, and Evansville, IN (1932). Within Kentucky, annual competitions were started in Louisville (1935), Lexington (1937), Paducah (1939), and Owensboro (1942).

It was a shared belief that the Kentucky boxing laws mandated segregation in the boxing ring. The State Athletic Board of Control was formed in June of 1920 and had sole control over professional boxing exhibitions. Amateur boxing in Kentucky was under the supervision of the Kentucky Amateur Athletic Union (AAU) and the State Athletic Board of Control [source: Journal of the Kentucky Senate, Regular 1924 Session, vol.1, pp.147-155]. In 1941, journalist Victor K. Perry wrote the following in The Courier-Journal: "The answer is found in the Kentucky boxing law, which prohibits fights between whites and Negro boxers." [Source: "Negro boxers glove winners," 03/12/1941, p.21]. The same answer had been given in 1897 in response to the Steve Crosby v Edmund "Kid" Rucker fight that took place on Six Mile Island in the Ohio River. The segregating of amateur boxers in Kentucky continued into the Civil Rights Era. The supposed law has not been verified at this time.

In Kentucky, white boxers competed against white boxers, and Negro boxers competed against Negro boxers. Champions of the Negro divisions were awarded trophies and medals, and sweaters and jackets. The white champions got the same, with added incentives that included new fighting attire and shoes, transportation, and all expenses paid for their competitions at the National Golden Gloves Tournament in Chicago, IL. One of the early and small changes in Kentucky took place in 1937 when African American boxers in the Louisville tournament became one of the tournament-opening bouts that had been reserved for white boxers. The Louisville Golden Gloves Tournament was sponsored by The Courier-Journal newspaper.

In Lexington, KY, there was a gentle reminder that the segregation decision was solely a local decision. In 1937, it was written in The Lexington Herald newspaper that the National Golden Gloves Tournament in Chicago would have both white and colored boxers. Reading between the lines, this meant that white boxers would be competing in the ring against African American boxers. The article continues to explain that in Lexington, KY, only winners in the city tournament white divisions would be allowed to represent Lexington at the national tournament. The Lexington Golden Gloves Tournament was sponsored by The Herald and The Leader newspapers. The whites-only policy for boxers coming from Lexington, KY, and other locations had no impact on the national tournament policy in Chicago, IL. In 1938, it was mentioned in the Wisconsin State Journal that the writer of the article was impressed by the number of exceptionally good colored boxers at the Chicago Golden Gloves Tournament. There was no denying it, African Americans were a major part of the Golden Gloves tournaments. In 1940 and again in 1941, Negro champion boxers from Lexington were allowed to go to Chicago (all expenses paid) to witness the national tournament and tour the city. They would not be competing. In 1941, the group met Joe Louis, the World Heavyweight Boxing Champion and the 1934 National Golden Gloves Champion in the 175-pound class.

At the close of WWII, major changes began to take place in reference to the Golden Gloves Tournaments held in the various cities in the United States. In 1946, the Washington, D.C. Amateur Athletic Union (AAU) was considering whether to bar colored athletes from local amateur competitions. It was hoped that a decision would be made before the start of the local Golden Gloves Tournament that was to be sponsored by the Washington Times Herald newspaper in conjunction with the local AAU. The previous year, the Washington Post had withdrawn its joint sponsorship with the local AAU because the district AAU refused to allow colored boxers to compete. The local AAU had tried to run the tournament on its own in 1945 with only white boxers, and the tournament was a failure. According to the article in the Pittsburgh Courier, it was estimated that 50% of the boxing fans in D.C. were African Americans. The most popular fights were between a white and a colored boxer. The second-largest gate receipts came from boxing matches between two African American boxers. The California Eagle, 11/28/1946, p.17, was one of the many newspapers across the country to run the article about the possible ban of colored boxers in Washington, D.C.

In Kentucky, it was proclaimed a history-making event in 1948 when it was announced that both white and Negro champions and runners-up would be allowed to compete in the regional Golden Gloves meets and the regional winners would go on to the national tournament. There is no mention in the newspapers of how this miraculous change occurred. Lexington was chosen as the Kentucky regional site. Louisville boxing champions would be going to the regional site in Evansville, IN, and the runners-up would go to Lexington, thus increasing the chances of more Louisville boxers going to the national tournament. The new changes did not get away from the segregation in the boxing ring. There would still be Golden Glove Tournaments in Kentucky with a white division and a Negro division. The policy change was that now African American winners from the local competitions could go to the regional meet in Lexington. The unchanging part of the policy was that at the regional meet, boxers would again compete in segregated divisions. The winners at the regional level (one Negro and one white for each weight division) would then go on to the national tournament to compete in Chicago. Source: "Golden Gloves open fire tonight," The Courier-Journal, 01/15/1948, p.20.

Finally, Negro boxers would represent Kentucky at the national tournament. One of the unintended outcomes of having more Negro boxers from Kentucky compete at the national level was the loss of those boxers at the local amateur competitions. The loss occurred because the boxers were becoming professionals after their bouts at the national tournament in Chicago. The local Golden Gloves Tournaments were for amateur boxers. Among the Negro champions from the 1948 Lexington Regional Tournament who went pro was Pierre Jackson from Henderson, KY. Jackson was in the national finals in the heavyweight class in 1948, and he was the light heavyweight champion in the 1949 regional competition. Others who did not return to defend their regional titles were Osborne Price, welterweight; Stanley Williams, bantamweight; and Leonard Young, lightweight. Source: "Golden Gloves competition to be classier in 1950," Sunday Herald-Leader, 12/18/1949, p.16.

The changes to the local Golden Gloves qualifications in Kentucky were just as convoluted as in other states. Newspapers shared the news. One example is an article from New York that ran in the African American newspaper Alabama Tribune, "Colored boxers dominate Golden Gloves Tournament," 04/09/1948, p.7. The article was referring to the 21st Annual Inner-City Golden Gloves Tournament that was held at Madison Square Garden. Alabama still held segregated tournaments with some cities having a whites-only policy for the entire tournament, and other cities holding tournaments with segregated divisions.

In 1953, in Paducah, KY, it was reported in the newspaper that colored boxers made up 1/3 of the contenders and they would be competing in the colored Golden Gloves division. Not only were the bouts still segregated, but also were the spectators. The second balcony of the Kentucky Theater was reserved for the colored audience members. Tickets were 73 cents for adults and 50 cents for children under 12.

In 1958, ten years after the article in the Alabama Tribune was published, there was change. Eight Negro boxers from Memphis, TN, made up the Golden Gloves team representing Paducah, KY. The team was on its way north to participate in the Chicago Golden Gloves Tournament. This was the road to the big times! The Chicago finals would be televised nationally. Winners of the Chicago tournament would earn the opportunity to compete against the New York tournament winners in Madison Square Garden. The competition between the Chicago and New York winners was the next step in qualifying for the national tournament.

African American boxers had to find other avenues when faced with racial roadblocks in their quest to participate in the National Golden Gloves Tournament. In 1956, the colored boxing team from Jackson, TN, entered the Montgomery, AL, colored tournament and finished with three champions and a team trophy. Brown McGhee, a featherweight boxer, won the Sportsmanship Award. Ernest Buford, the welterweight champion went on to fight in the National Golden Gloves Tournament in Chicago.

In Kentucky, the 1959 Supreme Court decision had an immediate outcome. The first of the Kentucky boxers to win a National Golden Gloves Championship in Chicago was Louisville native Cassius Clay [Muhammad Ali] on March 27, 1959, and, with the racial barriers removed, he won again on March 21, 1960. Ali is one of less than 10 boxers from Kentucky to have won a division championship at the national tournaments that started in 1928. At this point in time, all of the Kentucky boxers who have won a National Golden Gloves division championship were African Americans from Louisville.
The National Golden Gloves Tournament was held in Chicago, IL from its inception in 1928 through 1963. In 1964, Louisville, KY won the bid to hold the first national tournament outside of Chicago. Every year thereafter, the tournament was held in various other cities in the United States, returning to Chicago in 1992. The 2020 tournament was canceled due to COVID-19.