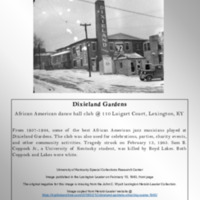 Dixieland Gardens was a dance hall club on the northside of Lexington, KY, located on Luigart Court. Some of the biggest names in jazz played at the club between 1937 and 1944. There were also amateur contests, charity functions, organization dances, anniversary and birthday celebrations, balls, and school dances. Not much has been written about the place or how it was operated as an African American club in a racially mixed neighborhood outside the city limits of Lexington, KY. Dixieland Gardens does not appear on the list of halls that welcomed those on the Chittlin' Circuit (an NPR webpage). For Lexington, the place most remember for drawing the big names among African Americans is the Lyric Theater on 3rd Street, just a couple of blocks from downtown Lexington. Though, out on the outskirts of the city, one mile north of the Lyric, live music and entertainment were also happening at Dixieland Gardens and by recognized names.

It was more than a place; Dixieland Gardens became an incorporated body in August of 1937. The proprietor was A. C. Harper. The incorporators were J. J. Galvin, R. L. Mulloy, Embry Lagrew, George W. Hall, and A. C. Harper. The group was allowed to operate a dance hall, athletic contests, amusements, and entertainments, and sell beverages of all kinds. The facility was advertised as a dance hall for "colored people." In the newspapers, the building name is sometimes spelled as Dixieland Garden.

On the inside of the building, there was an elevated bandstand, hardwood maple floors, a full-size bar, and 100 tables. The Grand Opening was October 8, 1937, featuring Andy Kirk and His Orchestra. Mary Lou Williams (an NPR webpage) was on piano and Pha Terrell and Henry Wells were the vocalists. Andy Kirk was one of the frequent performers. For a few brief years, Dixieland Gardens stayed booked with varying types of events. The Thanksgiving Dance featured music by Smoke Richardson and His Orchestra. Jimmie Lunceford and His Orchestra played in early December. It was a one-night performance, and arrangements had been made for white attendees who could purchase their tickets at the Sageser Drug Store at 127 N. Mill Street in Lexington. All of which meant that there would be an area in the club sectioned (segregated) off for whites. The following week, the Colored Voters' League, Inc. held a dance. It was a Christmas charity event and Smoke Richardson and His Orchestra provided the music, and Colonel Dick Curd was in charge of the cakewalk competition. Smoke Richardson was another frequent performer at Dixieland Gardens.

The following year, featured for January 29, 1938, was Stepin Fetchit (an NPR webpage) and His Harlem Hit Parade, along with Erskine Hawkins and His Orchestra, and Velma Middleton, Queen of the Blues. Two months later, Count Basie was scheduled for March 24th and he returned in May. The Sunset Royal Entertainers came to Dixieland Gardens in April of 1938; they were a swing band from Florida. Tickets cost 50 cents. Chick Webb and His Orchestra came to Dixieland Gardens in July of 1938, featuring Ella Fitzgerald. In October of 1938, Walter Barnes and His Chicago Orchestra arrived, featuring Dolly Hutchinson, Queen of the Trumpet. Advance tickets were 65 cents; at the door tickets cost 75 cents.

Life just kept moving along. Andy Kirk and His Clouds of Joy were booked for March of 1940. The Celtic Club brought in the Kentucky State Collegians, also for March. In April, A. C. Harper, the Dixieland Gardens proprietor, presented Four Ink Spots and featuring the return of the Sunset Royal Orchestra from Florida. There were also to be shows with 25 people. Advance tickets were 75 cents; tickets at the door were 90 cents. Count Basie returned in May of 1940. In June, Erskine Hawkins and His Tuxedo Orchestra arrived featuring Dolores Brown. Erskine Hawkins returned in September. That same month, the Selective Training and Service Act of 1940 was instituted. All men between the ages of 21 and 45 had to register for the draft. It was a peacetime draft; the U.S. had not yet entered WWII.

The Four Ink Spots returned to Dixieland Gardens in November of 1940. Andy Kirk returned in December featuring Mary Lou Williams, Floyd Smith, and June Richmond. Advance tickets 75 cents; at the door 90 cents. Ella Fitzgerald came back to perform twice in 1941. There was no notice in the Lexington newspapers. Claude Hopkins was booked for July 3rd. the Beauticians Ball was held at the club in September. The Coterie Club of Speigle Hill held their Lovers Ball there in September also. Other events may have taken place at Dixieland Gardens, but they were not mentioned in the local newspapers. The United States entered WWII in December of 1941.

Then, there was a tragedy. The Jimmie Lunceford Band was performing the night of February 13, 1943, when Boyd B. Lakes, who was white, fired his gun into the Dixieland Gardens building. One of the shots struck and killed 22-year-old Sam B. Coppock, Jr., a white student at the University of Kentucky. Coppock was the son of Mr. & Mrs. Sam Burdett Coppock. Also injured were two African Americans, 17-year-old Lonnie Lucas who lived in Pralltown on Montmullin Street, and 23-year-old Prentice Mayfield who lived on Bourbon Avenue. The Dixieland Gardens manager, Charles Call, was in the ticket office when a bullet passed through the office.

Sam Coppock had been with his friends in the designated area of the club for whites. There were about 30 or more whites in the club that night, according to the newspaper article, "Former bus driver confesses he fired shots which killed Ag senior at "Dixieland" club," The Kentucky Kernel, 02/16/1943, front page. Sam Coppock had been active in several campus organizations and he was a member of the enlisted reserves. He was one of the 30 students listed "In Memoriam" in the 1943 Kentuckian (yearbook). His picture and campus organization affiliations are in the yearbook on pp.154, 155, and 186. Sam Coppock would have graduated from the UK College of Agriculture in the spring of 1943.

The shooter, Boyd Lakes, a former city bus driver, lived on Loudoun Avenue, a few blocks from Dixieland Gardens. At about 1:40 a.m., he had fired four shots from a 30-30 lever-action rifle from about 150 yards away. Lakes said that he fired into the club to scare the people inside and to break up the crowd because he was still angry about the way that African Americans had treated him as a bus driver on the Georgetown Street route. Lakes said that the disagreements on the bus had caused him to quit his job three weeks earlier. Lakes also said that he did not know that there were any white people in the building because it was a Negro club and he had not intended to hurt anyone. At his trial, Lakes said that there was too much noise at the club and it was keeping him awake, so he shot into the building.

Lonnie Lucas and Prentice Mayfield were treated and soon released from St. Joseph Hospital. Sam B. Coppock, Jr.'s funeral was held at his parents' home. He was buried in the Brooksville Cemetery in Campbellsville, KY [see at Find A Grave]. He died three days before his 23rd birthday.

June of 1943, the Fayette Circuit Court jury sentenced Boyd Lakes to two years in prison for the death of Sam Coppock, Jr. The murder charge had been reduced to voluntary manslaughter. Six months later, in January of 1944, Boyd Lakes was released from the Kentucky State Reformatory at LaGrange, Kentucky. The release was authorized by the newly elected Republican Kentucky Governor Simeon Slavens Willis and the Commissioner of Welfare, Dr. Elmer E. Gabbard. Governor Willis was born in Ohio and his family later moved to Greenup County, KY. Dr. Gabbard was from Buckhorn, KY, he was head of Witherspoon College High School. Together, the Governor and Dr. Gabbard release 41 prisoners to probation, including Boyd Lakes who was from McKee, KY. His father served for 16 years as the McKee Deputy Sheriff.

Meanwhile, back in Lexington, KY, Dixieland Gardens was a stop for the Clarence Love band tour in 1944. The club hall was also used for birthday parties, political rallies, and other local events. By 1945, the highlife had ended and nothing more was in the newspapers about events held at Dixieland Gardens.

*This entry was suggested by Kopana Terry, University of Kentucky Oral History Archivist. Newspaper articles and a tour of Dixieland Gardens were provided by the present owner of the building, Mike Satterly.