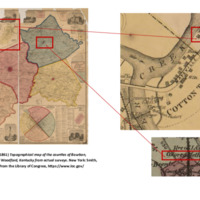 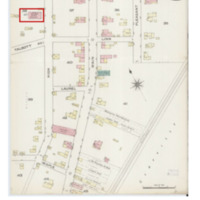 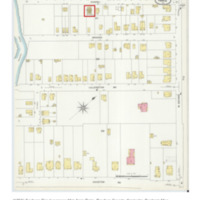 The St. Paul United Methodist Church is located at 1117 High Street in Paris, KY. It is thought to be the oldest African American Methodist church in Kentucky. The original building was constructed in 1858 when the church was named Cottontown Methodist Church. On the attached map dated 1861, the church is noted as Af M E Church [African Methodist Episcopal Church] and Colored Methodist Church in "Cotton Town." Cottontown was located in Bourbon County on Maysville Road 68 (today East Main Street). There were cottage homes that were originally built for factory workers. African Americans lived in Cottontown just beyond the railroad overpass heading toward Millersburg, KY.

In June of 1876, a tornado destroyed the [Cottontown] Colored Methodist Church in Paris, KY. The tornado struck around 6:30p.m. and 10-12 homes were also destroyed. The news of the tornado was reported in the National Republican newspaper in Washington, D.C., 06/24/1876, p.1. [Available full-text online at the Library of Congress] The church was rebuilt at 1117 High Street and the effort was led by Rev. George Downing. Around 1859, Rev. Downing served as pastor of the Colored Methodist Episcopal Church in Lexington that was located on the east end of Water Street, according to Williams' Lexington [Kentucky] Directory, 1859-60. In Paris, with the rebuilding of the church that had been in Cottontown, the new church was renamed St. Paul Methodist Church. At some point in the 1870s, Rev. George W. Hatton, from Maryland, became pastor and the church was named St. Paul Methodist Episcopal Church.

Rev. George W. Hatton (1842-1914) was a veteran and a civil rights activist. In 1880, he led a group of men in standing up for William Giles by proclaiming the Civil Rights Act of 1871 had been violated due to there being no African Americans on the grand jury that indicted Giles. The group formed the Bourbon County Protective Union of Color with Rev. Hatton as the first president. Rev. Hatton would leave Paris. "In 1885, he was pastor at St James AME Church here in Danville, and it was under his pastorship that the church building was completed and opened. George Hatton died in Oxon Hill, MD 16 May 1904, and is buried in Arlington National Cemetery." In 1890, he was co-editor of The Champion newspaper with Horace Morris in Louisville, KY. For more see Ta-Nehisi Coates, "George W. Hatton's Long Road," The Atlantic (online), 01/20/2011. The quote comes from Mike Dennis, Publicity, Danville Boyle County African American Historical Society, Inc.

The St. Paul Methodist Episcopal Church was a member of the Lexington Conference of the Methodist Episcopal Church. The conference was established in 1869. Andrew Bryant (d. 1870) was one of the founding member of the Lexington Conference, he was from Paris, KY. Several years earlier, it was written that Rev. Andrew Bryant and Rev. George Downing were credited with 60 conversions, 60 additions to the church, and 32 baptisms at the close of the 5-week Methodist revival in the African Church in Lexington. Source: Annals of Southern Methodism for 1855, edited ty Rev. C. F. Deems, 1856, Chapter IV - Reports of Revivals, pp.108-109.

In 1884, more than 6,000 people attended the Colored Methodist celebration of the 100th Anniversary of the founding of the Methodist Church. The celebration was held at the fairgrounds in Paris, KY.  Two years later, in 1886, the Colored Methodist Church in Paris wanted to try all its members who voted against prohibition during the local election. The church was referred to by other names in the media, and by 1886 the official name was St. Paul African Methodist Episcopal Church. The church property is noted on the Sanborn Fire Insurance Map for Paris, Bourbon County, Kentucky. A copy of the map page is attached to this entry. The church is on lot 38. Sources: "Religious," Semi-weekly Interior Journal, 07/18/1884, p.3; and Source: "Religious," Semi-weekly Interior Journal, 11/26/1886, p.3.

In 1911, there was a fire at St Paul African Methodist Episcopal Church (Box 31). It was a small blaze from the engine of the steam heater in the church. Rev. J. B. Redmond was the pastor. Source: "Small fire at Colored Church," The Bourbon News, 12/29/1911, p.5. In 1920, Rev. Redmond had been the Lexington District Superintendent of the Colored Methodist Church, and he was reassigned to a church in Cleveland, OH. Rev H. M. Carroll of Lexington replaced Rev. Redmond as the District Superintendent. According to the 1920 U.S. Census, Rev. Redmond and his family had lived at 436 Williams Street in Paris, KY.

Also in 1920, Rev. T. L. Ferguson left St. Paul African Methodist Episcopal Church to take charge of Mt. Zion Church in Cincinnati, OH. Rev. Wood of Louisville replaced Rev. Ferguson who had been pastor of the Paris church since at least 1917 when the cantata "King Alcohol" was presented at the church. The group that organized the cantata was encouraged to repeat their performance at the local opera house. The actors who took part in the cantata were Ms. Daisy Hitch, Mrs. Louise Ayers, William Barton, Homer Nutter, Lula Seals. and Artie Thomas. Dr. J. W. Mebane was the chorister and conductor, along with Christine Mebane, pianist; Maceo Bishop, pipe organist; Dr. J. H. Sebree and Mrs. C. D. C. Mebane, violinists; and George Becket, saxophone. Sources: "Changes in ministry," The Bourbon News, 04/16/1920, p.8; and "King Alcohol," The Bourbon News, 08/17/1917, p.4.

In 1968, the United Methodist Church was created from the merger of the Methodist Church and the Evangelical Brethren Church, which also ended the segregation of the African American congregations. The merger took place at the General Conference in Dallas, TX.

*See Shorter Chapel AME Church on the Sanborn Fire Insurance Map from Paris, Bourbon County, Kentucky, 1907. The map is attached to this entry.