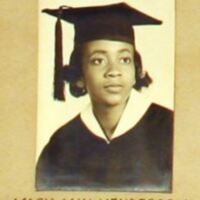 Summer of 1949, Mary Ann Henderson enrolled in the UK College of Education and completed her master's degree in 1950 [source: University of Kentucky Eighty-Third Annual Commencement Exercises, Nineteen Hundred Fifty, p.46].  As a result of Lyman T. Johnson's lawsuit, the University of Kentucky had started the integration process in 1949, and Mary Ann Henderson was one of the more than 30 African American students to enroll for classes that summer. All of the African American students in 1949 were graduate students or they were enrolled in a professional program.

The University of Kentucky was fully opened to African American undergraduates in 1954. Holloway Fields, Jr. had graduated from the UK College of Engineering in 1951, it was a professional program.

Mary A. Henderson was a school teacher in Cynthiana, KY, and in Lexington, KY, and she retired from teaching in 1989. In celebration of the success of Lyman T. Johnson's lawsuit and her graduation, Mary Ann Henderson Adams received a 2006 Torch Bearer Award [source: "Recognition of African American Women at the University of Kentucky," p.1].

Mary A. Henderson Adams was the wife of James R. Adams who was a civic leader in Lexington and a lay speaker with the United Methodist Church [source: Jennifer Hewlett, "James Adams, Methodist lay speaker dies," Lexington Herald-Leader, 12/11/1996, Obituaries, p.B2].