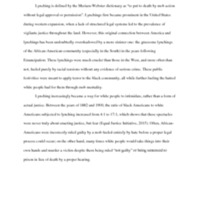 Bush v. Kentucky (John Bush vs The Commonwealth of Kentucky)

The murder trials of John Bush were an ongoing "tug of war" for a few years; it was a matter of race and jury selection in Kentucky. In January of 1879, John Bush was accused of shooting 13 year old Anna Vanmeter in the thigh. Bush was a Kentucky-born African American who lived in Fayette County, KY. Anna Vanmeter, who was white, died a week or so after being shot. She had been sharing a bed with her sister who had scarlet fever. The defense claimed that Anna Vanmeter died from scarlet fever and not the wound to her thigh [source: "Special to the Courier-Journal," Lexington, Feb. 5., Courier-Journal, 02/06/1884, p. 4].

John Bush's case went to the Lexington grand jury and the all-white jury could not come to a verdict. In May of 1879, a second trial was held and an all-white jury convicted John Bush of capital murder and sentenced him to death. The case was appealed and the Kentucky Supreme Court reversed the verdict and ordered a new trial. Bush's attorney asked that the case be moved to the U.S. Circuit Court. The request was denied and John Bush was again found guilty and sentenced to death by an all-white jury at his third trial. Bush asked for a writ of habeas corpus for the U.S. Circuit Court for Kentucky. A motion was filed that the case be removed to a federal court on the grounds that Kentucky laws exclude Negroes from grand and petit juries. The federal court agreed with the defendant, and John Bush was released.

When John Bush was taken back to Lexington, KY, he was arrested and placed in jail; he is listed as married and incarcerated in the 1880 U.S. Federal Census. In December of 1880, the State of Kentucky charged John Bush with the same offense, and in May of 1881, Bush was tried for the fourth time by an all-white jury, convicted, and sentenced. An appeal was filed in 1882, and the Kentucky Supreme Court affirmed the judgment. The case was then taken up to the U.S. Supreme Court, resulting in the reversal of the Kentucky Supreme Court's judgement on January 29, 1883. The Opinion of the Court by Justice Harlan: The defendant's conviction and sentencing violated the Constitution because the laws of Kentucky expressly precluded Negroes from serving on grand and petit juries.

While the U.S. Supreme Courts' decision in "John Bush v. The Commonwealth of Kentucky" is still recognized and discussed in the field of law, there is no mention of the fact that there was no enforcement of the decision and the state of Kentucky ignored the decision. On November 21, 1884, John Bush was hanged in the Lexington jail yard [source: "John Bush's execution," Lexington Leader, 01/06/1890, p.8]. John Bush's defense counsel was L. P. Tarleton, Jr., a lawyer, former sheriff, and a race horse owner in Lexington, KY. Jockey Isaac Murphy rode for Tarleton Jr., Swiney, and McIntyre. John Bush had been a domestic servant for Lexington lawyer William Preston, according to the 1870 U.S. Federal Census. He is listed as a farmhand who lived at 167 Correll Street in Lexington, on p.55 in Prather's Lexington City Directory, for 1875 and 1876. For more see "Bush v. Kentucky" {107 U.S. 110 (1883)} on p.86 in the Encyclopedia of Capital Punishment in the United States by L. J. Palmer; Jury Discrimination by C. Waldrep; and Bush v. Commonwealth of Kentucky, a Cornell University Law School website.

The paper by University of Kentucky student Cassie Odom is used with her permission. Fall 2017. Class: GEO406 taught by Dr. Lynn Roche Phillips.