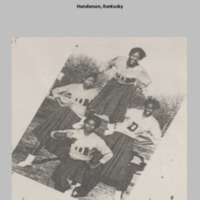 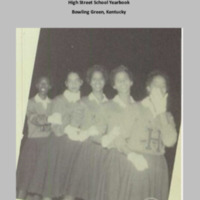 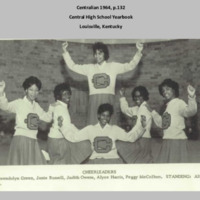 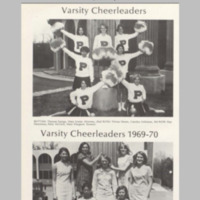 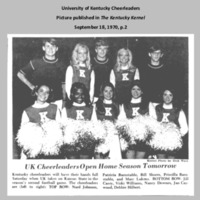 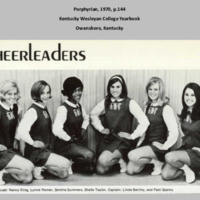 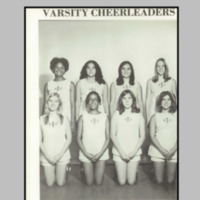 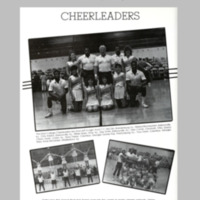 There has not been a written history about the African American cheerleaders at Kentucky's segregated high schools and colleges, and their continued journey through the turbulent years of integration. The former cheerleaders are pictured in yearbooks, and some of their personal experiences have been shared in oral histories, journal articles, books, and newspaper articles. These sources will also contain the accounts of those who fought for the integration of cheerleading squads starting in the 1960s. School yearbooks are reliable sources for tracking the changes that may or may not have taken place over time.

The cheerleading squads were just one of the many school and college activities that were to have an integrated student membership. Students of all races were faced with the change from belonging at their former segregated schools to trying to figure out how to belong at the newly integrated schools. The school teams and organizations rosters changed. Though, cheerleading was not considered a competitive team sport during this period. Cheerleaders were a team support unit. Before and after integration, cheerleaders were expected to have the right grades, a certain body image, and be an abled-bodied person with a degree of athleticism. Cheerleaders represented a standard of beauty and good looks. Not just any student could be a cheerleader. During the years of school integration, there was an extra degree of resistance to having African Americans on the cheerleading squads at integrated schools. This was yet another challenge in the overall Civil Rights in Education Movement.

The push to include African American cheerleaders at integrated schools was taking place all over the United States. One example of unrest was in Burlington, NC, in 1969. Four African American girls at Williams High School were booed at the try-outs and they were denied a place on the cheerleading squad. The whole situation of discontent grew beyond the high school and there was an eruption of violence in the city. A 15-year-old African American student was killed in the exchange of gunfire. (Minchin and Salmond)

In Kentucky, the fight to include African American cheerleaders at the newly integrated schools continued. Sometimes the struggle became a media story. Sometimes not. Discussion of the disagreements may or may not have been added as agenda items at school board meetings or the board of trustees' meetings. At some locations, the first African American cheerleader was added to the squad without a public announcement, or recognition, or disruption. For other schools, the question of having an African American cheerleader was never addressed and nothing changed for a decade or two or longer. There was not a state-wide mandate or law for there to be a certain number of cheerleaders of any given race. There was not a how-to manual for the schools or colleges. No one kept count of how many Kentucky schools had an integrated cheerleading squad. Title IX would come about in 1972 and addressed sex-based discrimination, but not race-based discrimination. Each school responded in their own way to cheerleading concerns. For those locations where there was dissatisfaction among the students and parents, there was the potential for student protests, sit-ins, walk-outs and walk-offs, conversations and advice from civil rights and other organizations, and pushback from community leaders.

In 1968, Hopkinsville High School closed for a day due to several incidents of racial unrest after two African Americans were appointed to the school's cheerleading squad. That same year at Paducah Tilghman High School, Wanda Stegar tried out for the cheerleading squad and was denied. She had been a cheerleader in junior high school. Stegar's friend and fellow student, Arlando McReynolds took up the cause and was organizing a protest with football players walking off the field at the season opener. According to an article in The Paducah Sun newspaper, Principal Bradley Mutchler did not go to the school board, but instead negotiated with Arlando McReynolds to call off the walk-off in exchange for allowing Wanda Stegar to join the cheerleading squad, and the school band would stop playing Dixie during the pep rallies. When it came time for the first football game, there was a bomb threat and none of the cheerleaders got to cheer. Wanda Stegar Platt was the first African American cheerleader at Paducah Tilghman High School.

In January of the following year, 1969, a delegation of African Americans came before the Hopkins County Board of Education to request that at least 2 African Americans be included on the cheerleading squads at all schools in the system. In October of that year, the Kentucky Human Rights Commission urged high school principals to mainstream African American students in student activities such as cheerleading and student government. In 1970, the lack of African American cheerleaders at Earlington High School was one of the complaints brought to the Earlington Human Rights Committee. The committee was formed with the hope of easing racial tensions in the city following the shooting of an African American man by a white police officer. According to the local newspaper, Earlington Mayor Robinson's response concerning the complaint that there were no African American cheerleaders at the school was, "This is a matter for discussion by the school board." ["City Talks Problems: Human rights group named at Earlington," The Messenger, 12/30/1970, p.9]

The addition of the first African American cheerleaders in Kentucky's integrated schools and colleges continued well beyond the Civil Rights Movement in Kentucky. Dr. Beverly Dillworth-Frye, a 1984 graduate of Heath High School in West Paducah, KY, was the first African American cheerleader at the school, she was captain of the squad, and she was elected the first African American homecoming queen. In 1989, Members of the Citizens Concerned About Our School System brought their grievances of racial discriminatory practices to the Hopkins County Board of Education Meeting. They complained that no African American cheerleaders were selected for the Madisonville-North Hopkins Cheerleading Squad. In another area of the state, in 1993 there was a protest in Louisville, KY. The U.S. Justice Department's Office of Civil Rights in Atlanta, GA, was contacted because the local high school cheerleading and dance teams in Louisville were nearly all white. In response, the Jefferson County School Board mandated that "Each cheerleading and dance team in the county must have at least one black member."

There are many, many more accounts of the actions and decisions made in response to requests to integrate cheerleading squads in Kentucky schools and colleges. No two stories are the same and not all fights ended successfully. Those memories that have not been recorded continue to be held within the individual communities. At the very bottom of this entry is a list of sources that will help direct the search for additional information about the overall history of the cheerleading integration movement in Kentucky.

Additional Sources:
Suggested sources for researching the history of the integration of cheerleading squads in Kentucky high schools and colleges.
1. Inquire at the local high schools, public libraries, and historical societies for high school yearbooks in paper and online, and for correspondence, board of education minutes, and other documentation.
2. Inquire at the college library archives for college yearbooks in paper and online, and board of trustees' minutes, campus newspapers, and other sources.
3. See the scanned collection of city and county high school yearbooks within Ancestry (1900-2016) and see the yearbook collection online at the Kentucky Digital Library.
4. Kentucky State University Yearbooks (HBCU) are available online. Simmons College Yearbooks (HBCU) are online at Kentucky Digital Library. Contact the university archives for additional documentation on integration efforts.
5. There are only a few African American high school yearbooks (Kentucky) that are included in online collections or available to the public in paper. To locate more of these yearbooks, search in Ancestry.com, contact the associations that represent the formerly segregated high schools, and contact local historians and historical associations.
6. Search Kentucky newspapers and college newspapers for articles. The newspapers are available in paper, on microfilm, and online at public and college libraries. There are also newspaper titles online at the Kentucky Digital Newspaper Program (KDNP) at UK, Chronicling America at the Library of Congress, and the subscription database Newspapers.com.
7. Search the oral history collections, such as SPOKEdb at the University of Kentucky and oral histories in the Kentucky Digital Library collections.
8. See the Kentucky High School Athletic Association (KHAA) records at Eastern Kentucky University Special Collections and Archives.