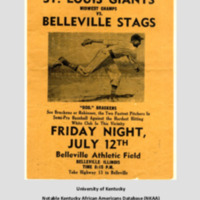 (born: May 12, 1915  -  died: February 15, 1994) This entry was suggested by Donn E. Cooks, the great-grandson of Herbert Bracken. Cooks also provided several references and the full text of articles. Copies of the two images attached to this entry were provided by Donn Cooks.

Baseball player Herbert Bracken was born in Paducah, KY, the son of Samuel and Mariah Cole Bracken. Shortly after he was born, the Bracken family left Paducah and moved to Missouri. They are enumerated in the 1930 U.S. Census when the family of six was  living in St. Louis, where Samuel Bracken was supporting his family from wages earned at a foundry.

Samuel's son Herbert was a 6'3" righthanded pitcher  who went by the name Doc Bracken; information about his baseball career will be found under that name. Doc  played on several baseball teams. He was in his 20s when newspapers took note of his pitching skills. One of the early mentions was in 1938 after he had a sensational game pitching for the St. Louis Negro Giants. His team defeated the Kansas City Monarchs, 10-5. Bracken was said to have "fanned 17" batters.

His fame and his game continued to grow. By September of 1938, Bracken had led his team in winning 32 of their 36 games. He was said to have pitched against and defeated every team in the Negro American League in 1940. Two years later, the St. Louis Negro Giants won the Mid-West Semi-Pro Championship. At the 10th Annual Negro All-Star Game in 1942, Doc Bracken was the starting pitcher for the East Team.

In 1943, the St. Louis Negro Giants were being referred to as a semi-pro team. On March 11, 1944 Doc Bracken entered the U.S. Navy. During his enlistment, he pitched for the Navy's Great Lakes Naval Training team, the Great Lakes Negro Varsity. Bracken received a trophy for going 13-1.

Bracken was next stationed at Pearl Harbor, where he was one of the two African American players on the baseball team. Sportswriters considered Doc Bracken one of the greatest pitchers in Negro baseball, right up there with Satchel Page, "Showboat" Smith, and Impo.

For a full account of Doc Bracken's baseball years during his military service, see "Black Bluejackets: The Great Lakes Negro Varsity of 1944" by Jerry Malloy at the Society for American Baseball Research [SABR]'s  webpage. Herbert "Doc" Bracken received an Honorable Discharge from the U.S. Navy on August 30, 1945.

In July 1946, Doc Bracken was signed to pitch for the Cleveland Buckeyes during an exhibition game that ended in a 12-2 loss. Bracken left the Brown Dodgers and signed to played for the Detroit Giants in 1946 [in the Negro Major League] with Bob Palm as the team manager. Bracken next played for the Cleveland Buckeyes, 1946-1947 [in the Negro American League]. In August of 1948, Doc Bracken pitched for the St. Louis Braves [also in the Negro American League]. Doc and his older brother, pitcher J. D. Bracken, played together on the Braves team. In a 1949 newspaper article, they were referred to as the Bracken brothers who were first rate pitchers.

By July of 1949, Doc Bracken had left the St. Louis Braves and signed to play with the Belleville Stags, a New York Yankees affiliate. Bracken left the Stags to pitch for the Metropolitan Stars under manager Josh Johnson in 1953. From 1953-1954, Bracken also played with the Paris Lakers, a minor league team in the Mississippi-Ohio Valley League. In August of 1956, Doc Bracken was coming to the end of his baseball career when he was mentioned as the pitcher for the St. Louis Braves. The team was in the Tandy League, and Bracken, at 41 years-old, led the league with his pitching. In a game against the Eagles, he fanned 17 batters and allowed only four hits in a 7-1 win. In 1976, Herbert "Doc" Bracken was one of 12 men inducted into the St. Louis Amateur Baseball Hall of Fame.

Herbert "Doc" Bracken died in St. Louis, MO in 1994 and he is buried at the Jefferson Barracks National Cemetery.

Read about Paducah, Kentucky in Wikipedia.