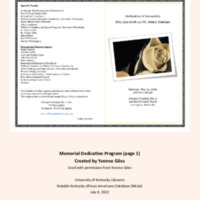 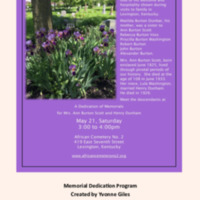 Both Joshua and Matilda would leave Kentucky, taking very different paths in life before coming together in Dayton, OH. Matilda Burton Murphy and Joshua Dunbar were married in Dayton on December 23, 1871 (Ancestry). Their children Paul and Elizabeth were born there. Matilda had two older children, William T. Murphy and Robert S. Murphy. See the Matilda Dunbar entry in the NKAA Database for more information about her life and her children.

* Willis and Eliza Burton were the parents of Matilda Dunbar. No information has been found for Willis Burton at this time. Eliza Burton left Kentucky and lived in Dayton, OH. She had been an enslaved woman; it is not known how she gained her freedom. She was listed on p. 67 in Williams' Dayton Directory for 1862-63  living at 47 Howard Street. As early as 1873, she was a widow living with Matilda Dunbar and her family at 311 Howard Street. She is last listed on p. 99 of Williams' Dayton City Directory for 1876-7. Eliza's and Willis' other children were Ann Burton Scott, Rebecca Burton Voss, Priscilla Burton Washington, Robert Burton, John Burton, and Alexander Burton.

* Ann M. Burton Scott, 1830? - June 8, 1933, was born enslaved in Lexington, KY. Ann was twice married before becoming a free woman. She is first listed in the 1870 US Census as Ann Burton living in Lexington with her brother Alexander Burton, a shoemaker. In the 1880 U.S. Census, both Ann Scott and Matilda Burton were enumerated as living with their sister Priscilla and her family at 211 Corral Street, the same address for Ann Scott when she was listed on p. 166 of Williams' Lexington City Directory for 1881-82.

In the 1900 U.S. Census, Ann Scott was said to be about 74 years old. Her sister Priscilla had died and Ann was living as a servant in the home at 66 Corral Street with her brother-in-law George Washington (Priscilla's widow) and his family. In the 1920 U.S. Census, she was the homeowner at 368 Corral Street;  her niece Lula Washington Dunham and Lula's husband Henry Dunham and their three daughters were also living in the home. [Lula was Priscilla's daughter.]

Ann Scott died in 1933 at her home on Deweese Street; she was thought to be about 100 years old.  She is buried in African Cemetery #2.

* Alexander Burton, February 1839 - April 28, 1897, was born in Fayette County. He was a veteran of the U.S. Civil War, having served with the 12th U.S. Colored Heavy Artillery Unit. He enlisted at Camp Nelson, KY. On his military record, Alexander Burton listed William Burton in Lincoln County, KY as his owner.

After the war, Alex Burton was a shoemaker in Lexington, according to p. 44 in Maydwell's Lexington City Directory for 1867. He had an account (#642) at the Lexington Freedman's Bank (Ancestry). On his bank application, he named his parents Willis and Eliza Burton and his siblings Robert, Ann, and Priscilla.

Alexander Burton lived with his sister at 211 Corral Street in Lexington, according to the 1870 U.S. Census. He was the husband of Mattie E. Burton; the couple had two children (John and Emma). The family was enumerated in the 1880 U.S. Census while living in Boyle County, KY.

In 1897, Alex Burton died of tuberculosis at 66 Corral Street in Lexington, according to the Lexington Certificate of Death (Ancestry) and is buried in African Cemetery #2. Mrs. Eliza Burton (wife of Fate Burton) was appointed the administrator of his estate. She purchased the home at 211 Corral Street.

Robert was married to Annie Elizabeth Lucas Burton. The couple had one daughter, Dora Burton Rice. He  owned his home in 1900 and would own his laundry business according to the 1910 U.S. Census. A leading member of the Wesleyan Methodist Church of Dayton, he was one of the church incorporators in 1911 and served as a church trustee.

Robert M. Burton died suddenly of a heart ailment in 1914. He is buried in the Woodland Cemetery.

* Rebecca Borden Burton Voss, 1847? - November 19, 1935, was born in Lexington. She spent most of her adult life in Dayton. She was the wife of Moses Voss, a whitewasher from Tennessee, according to the 1880 U.S. Census. He was also a U.S. Civil War veteran. Rebecca was the mother of Anna Spencer and Ella Voss. She became a widow when Moses died in 1897.

Rebecca Borden Burton Voss was said to be 89-years-old when she died at the Ohio State Mission Home in Dayton in 1935. She was buried in Woodland Cemetery.

Priscilla and George Washington are enumerated in the 1880 U.S. Census. In the 1900 Census, George Washington is enumerated as a widow, and it is noted that George and Priscilla had been married for 28 years. Based on information in the census record, it is estimated that she died in 1900. Her husband George  and four children are enumerated in the 1900 U.S. Census. Also living in the home on Corral Street was George's son-in-law Thomas McGee and Priscilla's sister Ann M. Scott.

John Burton was an active member of the African American community in Lexington, often serving as a court-appointed appraiser to evaluate the estates of African Americans who had died. In 1896, he was chosen as the tailoring instructor at the Colored Orphan Industrial Home in Lexington. In 1898, he  arranged for a Colored Oratorical Contest at the Lexington Colored Fair. A couple of months later, he was the business manager of the group of African American men who formed the Lexington Oratorical Contest that sent the winner to compete at the state level.

Burton was also considered "the local manager of all things theatrical" in the African American Community. He organized programs, sold tickets, and oversaw various performances and entertainments. He was a baritone singer who also performed in local productions. And he was a member of the Afro-American Amusement Company.

In 1903, John Burton was a board member of the newly incorporated Lexington Midsummer Fair Carnival Association (with no affiliation to the Colored Agricultural Mechanical Association).

Mrs. Maria H. Burton, the wife of John F. Burton, died in December  1904. In 1913, John F. Burton had a notice in the Sunday Morning Lexington Leader enquiring about his siblings in Dayton: Matilda Dunbar, Rebecca Voss, and Robert Burton. John had also written his son Edward Burton in Chicago to ask him to locate their relatives. John had given up his tailoring business in 1920 when he became the proprietor of the Douglass Park Cafe. Two years later, he became ill during the first days of May 1922. He died on May 8 and is buried in Greenwood Cemetery.