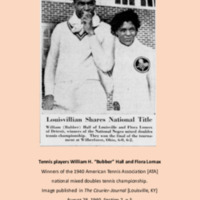 Back in Kentucky, in 1939, William H. Hall was the newly appointed Louisville Supervisor of Recreation for Negroes. The following year, he was the African American tennis champion (men's singles) in Louisville. Hall and his fellow team members came to Lexington, KY, to compete in the Negro tennis stars match held in Douglas Park. William Hall was hailed as the lead player who had held the Tri-State Negro Tennis (singles) crown. The team members from Louisville were Hall, Cleve Cowan, Alonzo Calhoun, Ed Smith, Freddie Hines, and Coach Ed Smith. The team members for Lexington were Albert Ray, Jr., William Madden, Charles Livisay, Rice Stone, Leonard Mills, and Coach/Player Ages Bryant.

The following year, William H. Hall gave up the position of Louisville Negro Recreation Supervisor. James Cayce replaced him. William H. Hall continued his tennis career and in 1941, he was ranked 15th in the nation among African American tennis players. Two years later, Hall was working at the Mengel Box Company in Louisville when he enlisted in the U.S. Army on January 8, 1943. According to his draft registration card, Hall was 6 feet 3.5 inches tall and weighed 204 pounds. He was in the Army for almost 2 years then received an honorable discharge on December 8, 1944. After his military service, he continued his tennis career. In 1955, he participated in the Louisville Public Parks Tennis Tournament.

In addition to his national tennis career, he had served as a Jefferson County Deputy Sheriff, and he was a retired schoolteacher and a retired postal worker. He had served as president of the Alumni Association of Fisk University. He was a founding member of the Louisville Tennis Club. The W. H. Hall Educational Fund was established in his honor.

William H. "Bubber" Hall was born in Louisville, KY, and he died in Louisville in 1984. He was the son of Walter and Nellie Valentine Hall, and the husband of Dorothy Smith Hall.

Read about Louisville, Kentucky in Wikipedia.