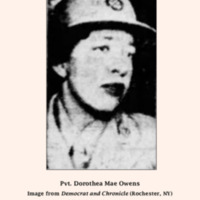 Dorothea Mae Owens enlisted in the Army in New York City, according to her record in the National Archives, Access to Archival Databases. She was born in Louisville, KY, the daughter of Pearl H. Riley and John W. Owens. Dorothea M. Owens was a graduate of Kentucky State College [now Kentucky State University]. She left Kentucky and moved to New York.

When she joined the Army in 1944, she was living in Rochester, NY, working as an elevator operator at the Genesee Valley Trust Company. In October of 1944, Dorothea M. Owens had completed her basic training at Fort Des Moines, IA, and was transferred to Halloran General Hospital in New York City where she would be a typist.

After her military service, Dorothea M. Owens returned to Rochester, NY, where she died in 2000. She is buried in the Riverside Cemetery.