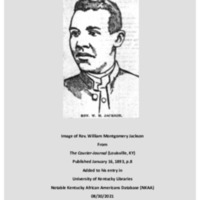 (born: February 11, 1854  -  died: January 19, 1928) Rev. William Montgomery Jackson was thought to be the first colored deacon admitted to the Episcopal priesthood; he was appointed in 1893. Ordained in the Church of Our Merciful Savior at the corner of 11th and Walnut Streets in Louisville, KY, Rev. Jackson was later named as head of the Episcopal Church in Henderson, KY.

Jackson had been a clerk with the War Department in Washington, D.C. for a year and a half as well as a teacher in Lexington, KY, for 15 years. He was also an instructor at N & I Institute in Frankfort, KY [Kentucky Normal and Industrial Institute for Colored Persons, now Kentucky State University]. Rev. Jackson was educated in Ohio, where his family was living by 1860 (source: 1860 U.S. Census). They had moved from Hillsborough, NC, where Rev. Jackson was born. His siblings were born in Ohio.

Rev. Jackson's early education took place at Oberlin College, where he attended the prep school from 1868-1872. He earned his college degree from 1872-1873.

In 1876, Rev. Jackson was the Rector at the St. Mark Parish in Wilmington, NC. He left that church to become pastor of St. Luke Episcopal Church, also in Wilmington. He then married Maria [or Mariah] Byrd Hubbard from Lexington, KY. Their marriage took place on February 12, 1878. The couple and their two sons lived in Briar Hill in Lexington, where Rev. Jackson was a school teacher (source: 1880 U.S. Census).

In 1881, Rev. Jackson was a U.S. Store Keeper with the U.S. Internal Revenue Office (source: Williams' Lexington City Directory for 1881-82, p. 105). In 1882, it was recommended during the proceedings of the Diocese of Kentucky that Rev. Jackson be admitted to the candidateship for the Holy Ministry.

In 1891, Rev. Jackson was living in Washington, D.C. and working at the War Department. He then  returned to Kentucky, where he was ordained into the priesthood in 1893 and named head of the Episcopal Church in Henderson. Rev. Jackson left Henderson in 1895 to become Rector at St. Mark Church in Wilmington, NC. He resigned from St. Mark Church on May 15, 1897 to become pastor of St. Joseph Episcopal Church in Fayetteville.

In 1900, the Jackson family was living in Cross Creek (Fayetteville), and there were four children in the home, three girls and a boy (source: 1900 U.S. Census). The following year, Rev. Jackson was charged with dealing in whisky. The local trial was held over to the federal court. The outcome of the federal trial is not known at this time, though in 1902, Rev. Jackson completed his D.D. degree at Livingstone College.

In 1907, Rev. Jackson was back in Kentucky and preaching during the evening services at St. Andrew's Church on 4th Street in Lexington. The church was founded in 1880, the 4th Mission established for African American Episcopalians in Kentucky. Rev. Robert C. Caswall was archdeacon over the church from 1905-1908. See the history of St. Andrew's Episcopal Church (online .pdf).

Rev. Jackson was an active member of the church. He lived in Frankfort and was a speaker at the 24th Annual Conference of Episcopal Church Workers held in New York in 1908. He was again teaching; Rev. Jackson was the Latin instructor in 1908 and 1909 at Kentucky Normal and Industrial Institute. In 1910, Rev. Jackson and his family lived in Crutchers School House, a community on Versailles Road in Franklin County (source: 1910 U.S. Census).

In 1923, Rev. Jackson and his wife Maria are listed in the Lexington city directory (p. 488). Rev. Jackson was listed as a pastor at St. Andrew's Church there. The chuch was led by Rev. Egerton Elliott Hall, the priest over the church from 1919-1924.

Rev. Jackson lost his wife Maria in the fall of 1923. He is last listed in the 1927 city directory (source: Polk's Lexington (Kentucky) City Directory, 1927, p. 326); he died in January 1928. Both he and his wife died in Washington, D. C., where a daughter and other relatives lived. Maria is buried in African Cemetery #2 in Lexington (see Find A Grave).

Rev. William Montgomery Jackson was the son of Andrew and Nancy Freeman Jackson.

* Rev. Joseph S. Atwell from Barbados was the first colored man ordained a Deacon of the Protestant Episcopal Church in Kentucky in 1866.