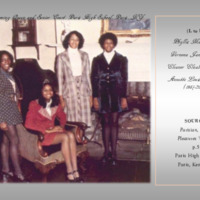 (start date: 1975  -  end date: 1975) The Paris High School, Senior Class of 1975, was the first class at the school to have an African American homecoming queen. It was also the first time that the entire senior court was African American young women. They were all elected by their fellow classmates. The entire process involved rejected names and replacements, and one recount after another recount. The Class of 1975 was persistent and put forth a good deal of pluck in challenging the old way of doing things, and they succeeded with absolutely no intervention from parents. The final selection of names was homecoming queen Vernona Janette Scott, Phyllis Marie Rice, Eleanor Elizabeth Moore, and Annette Louise Wheeler (1957-2016). See the photo image attached to this entry.