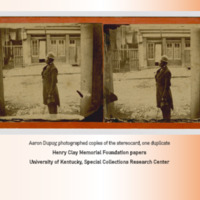 (born: 1787) Charlotte Dupuy was enslaved to Henry Clay who was Secretary of State, living in Washington, D.C. She wanted her freedom and her family's freedom. Henry Clay was a wealthy politician. He was born in Hanover County, Virginia and came to Lexington, KY, to practice law. He was elected to the Kentucky General Assembly in 1803, and represented Kentucky in the U.S. Senate and House. He also served as the House Speaker and the Secretary of State. He ran unsuccessfully for President of the United States.

While living in Washington, D.C., Charlotte Dupuy sued Henry Clay for her freedom in 1829, in the U.S. Circuit Court for the District of Columbia. Her attorney was Robert Beale. Her previous owner had promised freedom to her and her two children. The courts denied her petition. Charlotte Dupuy refused to return to Kentucky where Henry Clay had taken her husband and children. So, Charlotte Dupuy was put in jail, then forced to return to Kentucky after having been in Washington, D. C. for 18 months without her family. In 1840, Henry Clay granted freedom to Charlotte and her daughter Mary. Her son Charles was held in bondage for another four years. Her husband, Aaron Dupuy, was freed in 1852, just prior to Henry Clay's death on June 29, 1852.

According to the 1860 U.S. Census, Aaron Dupuy was a carriage driver. His picture has been added to this entry. He was born in Hanover County, VA, where he was enslaved to the Clay family. Aaron Dupuy died in Lexington, KY on February 6, 1866. He is often referred to as a faithful servant to Henry Clay. Aaron Dupuy was buried in the Presbyterian Cemetery in Lexington, KY [source: Ranck]. The Dupuy family is listed in the 1860 U.S. Census as a free family living in Lexington, KY. Their last name is spelled "Dupee." Charles Dupuee is listed as a laborer on p.62 in Maydwell's Lexington City Directory for 1867.

Charlotte Dupuy was born in Cambridge, Maryland, to enslaved parents George and Rachel Stanley. They were owned by Daniel Parker. Charlotte was eight years old when she was sold to James Cordon for $100. Cordon brought her to Lexington, KY, where she met and became the wife of Aaron Dupuy who was owned by Henry Clay. In 1805, Charlotte was sold to Henry Clay for $450. In 1825, the Dupuy family was brought to Washington, D. C. by Henry Clay while he served as the U.S. Secretary of State. Charlotte Dupuy's death date is not known at this time.

For more information and images of the documents surrounding the purchase of Charlotte and her petition for freedom see Charlotte Dupuy at the White House History webpage. See Charlotte Dupuy - Suing for Freedom, July 6, 2020, a visitlex.com webpage. See "History of Lexington, Kentucky: its early annals and recent progress by G. W. Ranck; and Collins' Historical Sketches of Kentucky. History of Kentucky by the Late Lewis Collins, v.1 by R. H. Collins.