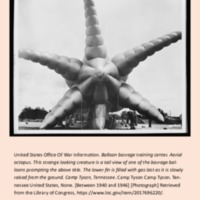 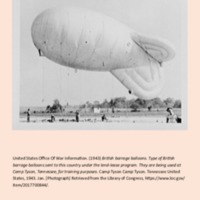 (born: 1921  -  died: 2005) George Washington Kenley, born September 2, 1921 in Murray, KY, was an enlisted soldier in the Balloon Barrage Battalion [source: WWII Draft Registration Card, and WWII Enlistment Record (Ancestry)]. George W. Kenley enlisted in Evansville, IN, on August 22, 1942. His enlistment took place a few months before the balloon battalion was created and developed at Camp Tyson, TN on June 5, 1942 with African American personnel. Camp Tyson was built in 1941 specifically for the training of the balloon barrage battalion and was the only one in the U.S. during WWII. The balloons were to be used to protect against costal attacks. There were 37 officers and 648 enlisted men at Camp Tyson. The trainees were taught to fly, build, and repair the barrage balloons that measured 35 feet in diameter and 85 feet in length.

The construction of the balloons cost between $5,000 and $10,000 per balloon. The balloons were made of two-ply cotton saturated with synthetic rubber, and when filled with hydrogen or helium, the balloons could be floated up to 12,000 feet. The U.S. barrage balloons were developed by the Army Air Corps and put into service by the Coast Artillery and the Marine Corps. The balloon battalions were originally developed in Europe during WWI as anti-aircraft defense systems against air bombings. They were used successfully in England, France, Germany, and Italy. During WWII, British instructors and balloons were brought to Camp Tyson, TN to assist with the training of U.S. soldiers.

During WWI, the balloons had hoovered over important buildings, such as steel mills and factories, and the balloons were tethered in place by steel cables. The balloons were a deterrent to low flying bomber planes by preventing enemy pilots from homing in on their targets and forcing the pilots to fly at a higher altitude, which made for more inaccurate bombing by the planes, but also made the planes more evident to the ground guns. The balloons flew as low as 4,000 feet and as high as 10,000 feet. If the enemy plane hit the steel cables anchoring the balloons, then the plane would likely be brought down.

During WWII, three men were tasked with anchoring each balloon, though it was recommended that five men do the job. The 320th Antiaircraft Artillery Balloon Barrage Battalion landed on Normandy Beaches on D-Day, June 6, 1944. The 320th was an all African American unit. The men secured the balloons along the coastline to obscure the view of German gunners. As the war continued, the balloons proved to be effective, but less so than they had been during WWI. It took almost 30 minutes for a good crew to get the balloons in place, fill them with hydrogen or helium, and anchor the steel cables. The U.S. military had to note that WWII was a much different war than WWI, and there were more superior aircrafts, bombs, and antiaircraft defense systems. The Balloon Barrage Battalions were officially disbanded in December of 1945. George W. Kenley, from Murray, KY, was discharged on January 17, 1946 and he returned home.

Camp Tyson became a camp for German and Italian prisoners of war. The camp was closed after the war.

George Washington Kenley died April 21, 2005 in Murray, KY. He was the son of Charlie Kenley and Alice Belcher Kenley.

Read about Murray, Kentucky in Wikipedia.