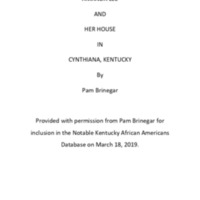 (born: 1829  -  died: 1909) In 1894, Amanda Lee was the owner of the first house built in the town of Cynthiana, KY, according to Lucinda Boyd. It was not known who actually built the house, which was a log cabin built around 1790, nor is it known how Amanda Lee came to own it. Lee was a free woman of color born in Kentucky in 1843. She is listed as a domestic servant of the John Dellows family in the 1870 U.S. Federal Census. Dellows was a tailor from Missouri and his wife, Sallie, was from Ohio. The town of Cynthiana, KY, was established in 1793. Amanda Lee was one of several free African Americans with the last name Lee in Harrison County, KY, prior to 1860. One of the earliest, Judy Lee, the daughter of Samuel V. Lee, was born around 1809 and died around 1852. For more see "First House,"  Chronicles of Cynthiana and other Chronicles, p. 9, by L. Boyd. For more current research, see the publication attached to this entry: "Amanda Lee and Her House in Cynthiana, Kentucky by Pam Brinegar."

Read about Cynthiana, Kentucky in Wikipedia.